Book three in the Charming Inn series is available now! 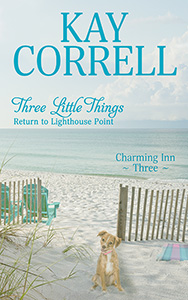 Sometimes a wish is only heard by the heart…

Widow, Ruby Hallet, has almost adjusted to living life on her own. She has her knitting friends in The Yarn Society—they call themselves The Yarnies. Her son, Ben, drops in often to see her—and he’s dating that darling woman, Charlotte. And she has her beloved dog, Mischief. What more could she need?

David Quinn has not adjusted to his new life. He misses everything about his old life and he’s come to Belle island to escape.

When Ruby and David meet on the beach and slowly become friends, they both begin to think they just might have a chance for a new life. Ben disagrees—loudly and often. The last thing his mother needs is a man in her life. Especially one who is just on the island for a short visit.

But when David finds out the one thing Ruby doesn’t need might be exactly what he has to offer, their happiness is in jeopardy. Even the unwavering support of the Yarnies can’t change the cold hard facts.