If I get stuck on writing a character, I sometimes have them write a letter. Like a diary entry.

This is Sara Jane, writing a letter to herself…

My world would have ended if Lizzie Timmons hadn’t saved my daughter, Rachel’s, life. They were sixteen then and Rachel was breaking about every rule in the book to be out swimming by herself. What if Lizzie hadn’t seen her struggling? What would my life be without Rachel?

Lizzie was a good kid. Rachel swept her up into her life after Lizzie saved her life. Rachel is like that. And I think Lizzie had a calming influence on Rachel. Lizzie thinks, Rachel just jumps into everything. But, my goodness, my daughter is beautiful. Red curls, thick hair, a beautiful smile with well-paid-for straight teeth. And, lucky girl, she married such a wonderful man. Ronnie. He thinks the world of my Rachel. Sometimes when I look at the two of them, I have an ache inside because I’ll never have that connection with someone. Never have someone look at me like that, full of love. Never be best friends with my husband.

My husband. Steven. He doesn’t even like me. I know that. I irritate him on so many levels. I’m not sure why he even married me. I was so happy when he asked me to marry him. On some level, I knew I was a project for him. Fix her up and make her into the exact wife that he needed. Which is why he calls me Sara, not Sara Jane. He says Sara Jane sounds trashy. But I love the name Sara Jane. It’s pretty. It fits me. My grandma used to say it with such a lilt in her voice. She called me her Sara Jane Girl. No one hardly ever calls me Sara Jane anymore. Except for Lizzie. She says the name fits me too. Of course, she doesn’t call me that in front of Steven though. No one wants to rock the boat around Steven.

Steven. Sigh. I know he sleeps around. I pretend not to notice and pretend it doesn’t hurt. But it does. I sometimes think I’ll get up the nerve to leave him. But who am I kidding? Where would I go? I’ve never worked. Well, not paying work. I can throw a party. I can organize things. I organized dozens of events for Rachel’s school when she was growing up. But I guess that doesn’t mean much to an employer. And Steven has enough connections in town that he’d probably get me blackballed from anyone ever hiring me. And I can’t leave town. I have to be near Rachel.

The one thing I wish for my Rachel is that she’d have a baby. I know she and Ronnie have been trying. For years. But they’ve had no luck. I thought maybe they’d try to adopt, but Rachel hasn’t ever said anything about that.

I always wished I would have had another child. But I never got pregnant again. I did find a suspicious bill when Rachel was about two. I think Steven maybe got a vasectomy one time when he said he was out of the country for a month on business. Not that he’d admit it to me.

Steven hasn’t hit me or anything, even though he threatens me. He’s just mean to me. Really mean. So people wouldn’t understand if I left him. He certainly supports me well. That’s what people see. We have a big, if empty, house. A mansion. The sunroom is my favorite room. Steven hates it, says it’s too bright. But I love it in there. I have white wicker furniture with lovely floral print cushions. There’s a porch swing out there too. I can’t believe Steven let me decorate it like I wanted to. I think I must have decorated it when he was having one of his first affairs. Maybe there was actually some guilt in him back then.

Well, I like my kitchen too. I love to cook. I have nice shiny stainless appliances now. Lots of counter space. There is a huge fridge and freezer in my walk-in pantry. Steven does buy me some of the nicest cookware. I know he just has his secretary go online to William Sonoma and order it, but I still like getting it.

Sometimes I’m scared I’ll grow old and sit out on the front porch all alone. Steven will still be out running around. I won’t have any grandchildren. And I’ll just be so very, very, terribly alone.

Sometimes I dream about what it would be like to meet some man who saw me for who I really am and likes me just like that. Didn’t want to change me, or correct how I do things. Who thought I was pretty. Well, who is going to think that now that I’m in my 50’s, with a bit of a menopause paunch, and my hair is graying? When I started graying, Steven announced that I had to dye my hair. But if he weren’t around I think I’d let my gray show. It doesn’t bother me. I’ve put in my years. I don’t have to look young. But I would like to look flirty sometime and have someone notice it. I’d like to pick out clothes that I love, and Steven would hate. A simple flirty black skirt. A colorful, sparkly top. Heels, but not too high. And silver jewelry. Steven hates silver jewelry. I love it. I would wear it all the time, if not for Steven.

I have a lot of “if not for Steven” type thoughts. That’s probably not what most married women think. Or do they? Do you think a lot of women settle for a marriage that doesn’t make them happy? Are you really allowed to be happy? Is your happiness more important than your family’s? I just don’t know.

Sometimes I dream of what it would be like to have my own place. Make my own decisions. Decorate how I want. Watch what I want on TV. Not have to hide books I’m reading that I know Steven would disapprove of. To throw a nice big casual dinner, instead of fancy events to impress people all the time.

But this is my life. I chose it and it is what it is. Even if it isn’t what I wish for.

See links to all retailers for Wind Chime Beach here. 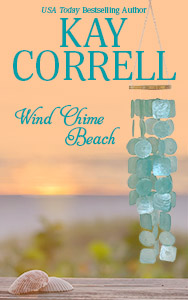